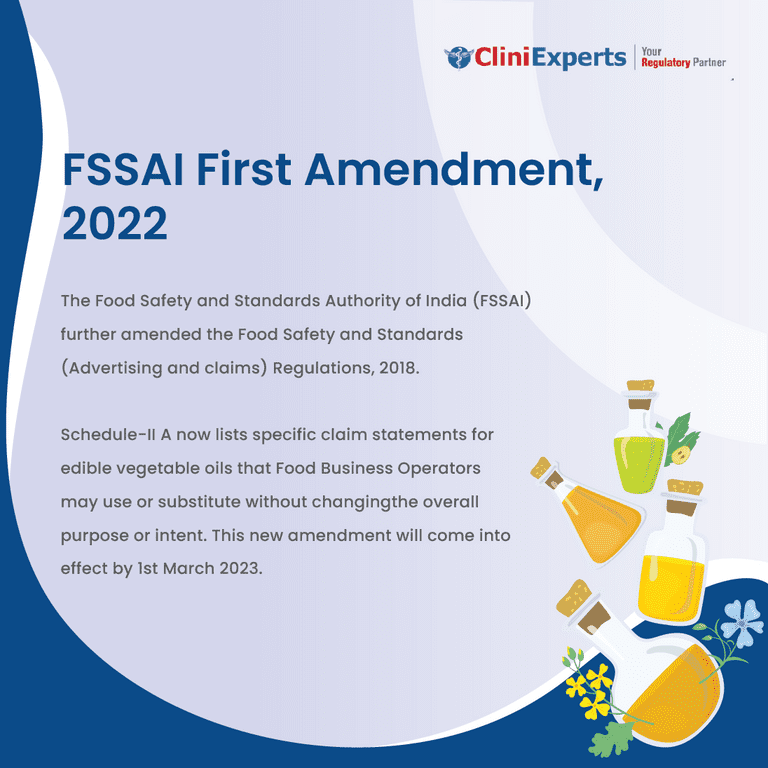 Food Safety And Standards Authority Of India Notification For Advertising and Claims. Get detailed information about the FSSAI First Amendment Regulation, 2022

F. No. Stds/SP(L&C/A)/Oil Claims/FSSAI-2018.–Whereas the draft of certain regulations, namely, the Food Safety and Standards (Advertising and Claims) Amendment Regulations, 2021, was published vide notification of the Food Safety and Standards Authority of India number No. F. No. Stds/SP(L&C/A)Oil Claims/FSSAI-2018 Dated 19th August 2021 in the Gazette of India, Extraordinary Part III, section 4 as prescribed under subsection (1) from section 92 under the Food Safety and Standards Act (Act 34 of 2006). (34 of 2006) inviting suggestions and objections from those susceptible to be affected by the notification within sixty days from the day that versions of the Official Gazette with the notice were made available to the general public;

In addition, the copies of the Official Gazette have been made accessible to the general public on 27th August, 2021

List of Claims for Edible Vegetable Oils (Checkout Regulation 7 (2A))

The claim statement below can be used on labels or in advertisements, depending on the situation requires:

The term that are used in this Schedule like Rich contains, Rich conforming to the terms specified in Schedules I:

If they choose to, Food Business Operators may choose to use the same or similar terms in claims statements in this Schedule without requiring any change in the purpose or meaning that the statement is claiming.